In November I left my home to save the world. It became the beginning of a very special friendship with a group of people, who are very different from myself in many ways. My project at Stairway, mostly concentrated around on the Stairway farm on Baclayan, a mountain about 10 km from Stairway Foundation. Here the locals as well as the workers belong to the Mangyan tribe. I naturally have a lot of experiences from up the mountain, but these are not to be described in the following. However, what I want to share now is my understanding of the social relations and interactions across the cultural gap, which forms a great deal of challenges that we are to face when working as an organisation.

In the beginning, the people that I worked with were extremely shy, which is not unusual for Mangyan people. This shyness is actually very characteristic for the Mangyan culture. They did not speak to me, but they kept an eye on me from a safe distance. Everyone was helpful and made sure that I had what I needed; like food, accommodation and safety. No more than that. When we were eating, they would prefer to sit on the floor in the dark corner of the room, instead of sitting at my table. I was prepared for this shyness, but it was just much more extreme than what I could ever have imagined. Not only was I a stranger. I also challenged the cultural habits by being a woman, even a young and unmarried one of the kind, working among the men. Furthermore, I was white but not the boss. Luckily, my project was quite individual, so I could work alone and mind my own business, while they would get used to me. After a period of time it became less problematic for them to have me present at the camp house. We found a way to be there together, without it being a problem that we do not share same language.

One day, out of nowhere, someone suddenly spoke English to me. Not long and complicated sentences, but enough to communicate, if one really wanted to. I guess, this person had something important he wanted to ask me. It turned out that almost everybody understood a bit of English and most of them were even able to talk a bit of the language as well. For me, it became a steppingstone and I understood from it that they were trying to communicate with me–it did not take long until they started making jokes aimed at me. The same way as they do with each other. It became really funny to be in the village. I believe they feel the same way, because one day the workers had made me a cover for my knife with my name carved in it. The cover is characteristic for the farmers here, and I take it really personally. Now I feel as a part of the group. 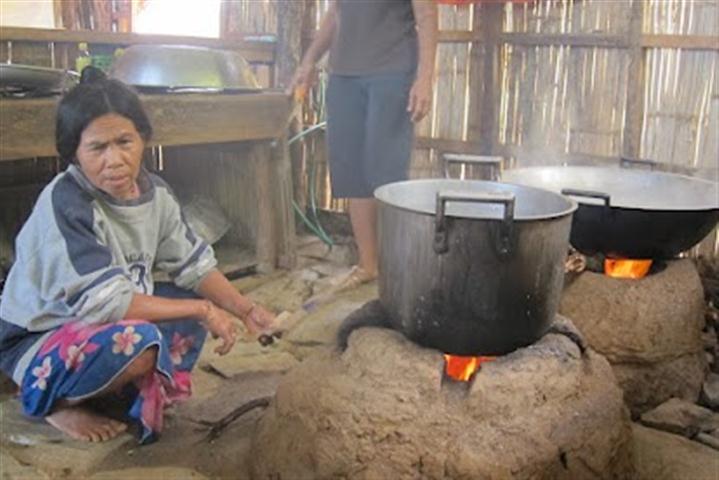 I did not pay much attention to the changes that had happened, and the development of the group, until we someday hired people to build a new kitchen. Especially one episode made me realize, how big a role the shyness of the Mangyans plays in their social interactions. A young man came to the house, but he did not speak. I invited him in, but when he saw I was alone, he went out again and stood out in front of the closed door. This behaviour seemed very strange to me. As it turned out, he was there to apply for a job, and he only wanted to talk to Elino, our oldest and most experienced employee. Until Elino came one hour later he refused all offers of coffee and shelter for the rain. Where I came from his behaviour would never have given him a job. Nobody would take him seriously. But here they did. His behaviour was perfectly normal and accepted. Two of the workers in Baclayan worked here for 3 weeks, before they even talked to me. When they started talking to me, they were not even unfamiliar with me. I had seen them many times in the village. But until then they would prefer to eat in the corner, never look me in the eyes and not even say “hello”. One afternoon when I came in from working, they were sitting and looking secretive. I did not believe my own ears when they invited me to join them. It was as if they had taken a deep breath and overcome their block. One more steppingstone. We had a really good time and of course they spoke a bit of English too, even though they had kept it secret for such a long time. 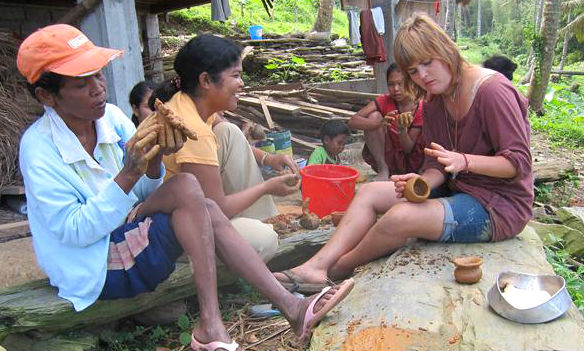 There have been Stairway volunteers on Baclayan before me, who have tried to socialize some more successful than others. I believe the secret behind my almost trouble free integration in the mountain is patience and sensitivity. I think the people here have come to trust me, because I respect that they are shy and need time to adjust to new people being in the village. I think it is important that people, who wish to work with and among the Mangyans, realise that you have to earn the acceptance of the people. They work hard and live simple lives, and it is very easy for people like me to fall into the box of “rich spoiled foreigner”. Of course I am, anything else would be a lie, but I put a lot effort into doing things on their terms as much as I possibly can. Even small things that seem to be unimportant can sometimes have grater meaning. An example is the habit of drinking from a shared cup. The sharing has a great social importance and symbolizes the solidarity and the brotherhood of the group. Eating only with my hands was difficult for me to get used to, but I have learned that this exact thing was understood as a sign of my trying to fit in.

I hope that future volunteers can benefit from my experiences. For me the good relationship with the Mangyans as well as with the Stairway team has been the way to change the world which is the goal of all our projects. All my work is depending on their good will. First of all I would never survive in the mountains without their guidance. An example is the skills of making a fire, which I never knew before, or even had to worry about. In the mountains you will starve, if you cannot light and sustain a fire for cooking, or if you do not know how to chop the firewood. They have taught me all that now. Second of all I would never have been accepted in the community and gotten a chance to share my project and knowhow, if I was not accepted by the people I work with first.

I believe that the cultural gap can be filled up step by step with patience, empathy and good intentions.