Stairway began developing the Daughter animation in 2001. The purpose for creating such an animation was to address the issue of child sexual abuse in an innovative and non-threatening way that could transcend cultural and language barriers. Since that time thousands have watched the Daughter animation through our Break the Silence trainings not only here in the Philippines but also in other countries like: Malaysia, Cambodia, Vietnam and Thailand. Through these trainings many have been compelled to share their own stories of sexual abuse and to pick up the cudgel to fight against it in all of its forms.

Last June 20, Ace Diloy, one of the senior trainers of the CSAP team, gave a training in Chiang Mai, Thailand. After the training, a participant sent a reflection on the Daughter animation and how it affected her.

I would like to personally thank you again for a great training. Everything you share and teach us is so true. It may be hard for some people that have not been through this to comprehend but what you guys have been doing are really speaking out loud for the victims. Everything in the video ‘daughter’ is 90 percent reflection of what happen to me and it helps echo my feeling that could not be refined in to words before though I tried. It is like the last missing piece that I need at the right moment for my healing. You guys were God sent angels and protectors of victims of sexually abused so please don’t give up on doing the good work.

I was not able to describe the feeling besides fear, scare, anger, guilt and the strong sense of trying to keep the home together for my step-brother to whom I love very much and his dad was his hero. Baring the feeling of it is ok that this happen to me, I rather keep silence. The last thing that I wanted to happen to me was being rejected by my mother who was the only attachment string that I have. 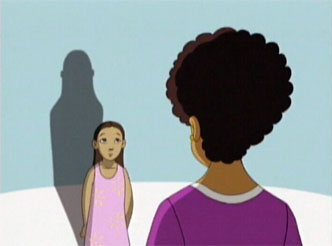 One of the most powerful scene was when the shadow of the girl grew higher than her actual side and that was me.

Though I was not wearing many layer of clothes, but I always locked my bedroom door to protect from someone to come in. A bedroom was supposed to be a place where you can lay your head down and rest but for me it was just a nice comfortable prison where someone else also hold the key to my door. I never felt at home though we had a nice big home and lots of money. A home was never a home for me because it was never a safe place.

He passed away 13 years ago due to stroke, and I buried the story with him on his death bed and I have never recalled myself having to go through grieve and lost nor do I need any consolation because of his death.

I believe in happy ending, and I intend for my story to end that way and want to be a co-author of the story for other victims like mine.

Thank you again for you and your team who have putting this together.

To view a clip of the Daughter animation, click here.

For more information on the Break the Silence trainings and workshops please contact us at: info@stairwayfoundation.org