Stairway’s commitment to train Philippine National Police on Child Sexual Abuse Prevention was the start of a journey that would eventually lead to the creation of Child Friendly Spaces in 10 stations across Manila.

As the children prepared for the annual Children’s Month celebration, three members of Stairway staff also prepared for their trip to Manila, for the installation of Child Friendly Spaces in 10 police stations.  They were well aware from past experience that preparation was not exclusive to collating materials and purchasing the necessary tools; the team also needed time to prepare emotionally and physically for their 10-day assignment.  For Birgit, a Stairway Board Member and an international volunteer for over 11 years, this journey would encompass a different meaning to Joemar, the House Father of the Residential Program and also to Jhao, a former street child and strong advocate for Children’s Rights.  Click to view images. 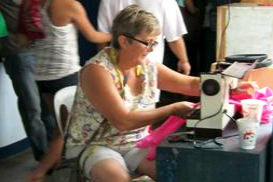 On reflection, the team recognised the emotional rollercoaster they encountered each day, from anticipation of seeing the designated room for the first time, to excitement at the prospect of creating a much needed Child Friendly Space.  However each station would pose its separate challenges as the working conditions varied according to location.   “One of the stations we went to did not have enough working space to accommodate us so we had no choice but to work outside on the streets, in the extreme heat,” Birgit explained.  “The worst part is you could feel the heat radiating from the jails, so you can only imagine what it must have felt like in the actual cell.”

For Jhao, the heat was not so much of an issue; it was the dungeon like smell that he struggled with.  He reported that in Navotas, the room allocated for the Child Friendly Space was directly opposite the jail cell and the extreme unsanitary conditions created a strong smell of urine which leaked into the room.  Jhao expressed his concerns about the impact this may have on the children who would visit the Child Friendly Space, but more importantly he feared that the victims may be confronted with their perpetrator and compromise their sense of security.  Despite these drawbacks, the team acknowledged that most police stations have limited facilities and counted their blessings that at least they had a room to work with.

For Joemar, the biggest challenge was seeing children in the jail cells as it brought him back to previous conversations with the boys he looks after in the Residential Program.  It was only when he physically saw the children in the cells that he was able to connect the boy’s stories with what he was seeing.  “It weighs heavy on your heart knowing that some of our boys have been to jail and experienced that same fear,” Joemar shared.Having grown up on the streets, Jhao was more able normalise what he was seeing and turn his thoughts to that of curiosity; he wanted to check if any of his old street friends were in those cells, but the darkness combined with too many faces made this task impossible. 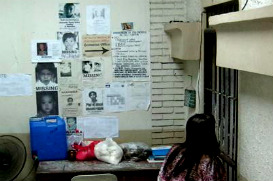 Despite having worked with vulnerable children in the Philippines for several years, nothing could have prepared Birgit for the sadness she would feel on seeing the wall of missing children which included victims of trafficking.  Each photo was accompanied with a description of the child, some as young as 2 years of age. “I was overcome with feelings of hopelessness as the problem of child abuse is so large here,” Birgit explained, “but at least through the Child Friendly Spaces we are able to chip away at the problem.”  As the team painted the walls and cabinets in child like colours, they were able shine light into the cells and send a symbolic message to the children looking at them…there is hope.

Working on this project gave the team an opportunity to meet the women in charge of the Child Friendly Spaces and hear about their individual experiences.  From this, they were able to meet a handful of inspiring police women. One shared her story of living in the Child Friendly Space for the last 11 years of as she is the only person assigned to work with children.  Another talked about her experiences which led her to start her own feeding programme for street children. 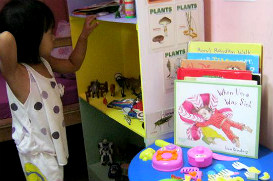