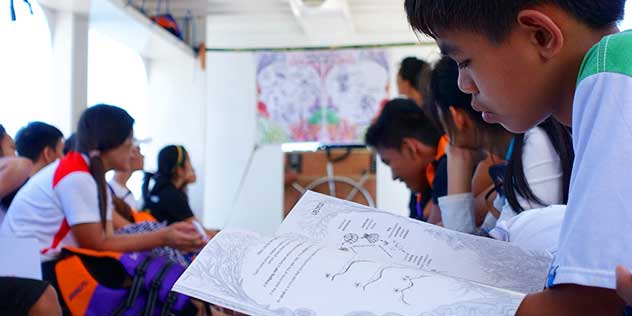 Puerto Galera – the home to Stairway Foundation’s Learning and Resource Center – is surrounded by some of the most diverse and unique marine life in the world. Despite conservation efforts from an ever growing dive industry in the area, the marine environment is under threat by destructive fishing methods, boat anchors, massive numbers of tourists snorkeling (and standing!) on the corals, and most of all the rise in water temperature. While the (almost entirely foreign owned) dive industry shows a natural interest to protect the marine environment , we see little indication that concern for the local environment has taken hold in the local population, or in the local government.

Experience from conservation efforts around the world shows that the most successful and sustainable initiatives are deeply rooted in the local population/community. Hence, the advocacy starts with information and education, and the best audience for that are the children and youth.

“This is one of the most unforgettable experiences in my life. My classmates realized the importance of the sea and its ecosystem and realized the effects of their wrongdoings. The best thing we can do is to share our knowledge.”
– A Student after a SAS trip

Stairway’s Sea Adventure School (SAS) is a floating classroom that immerses students into marine environments in order to educate and inspire them beyond what is possible in a traditional classroom. The whole day sea adventure gives a chance for students to explore the intricacies and the interrelatedness of mangroves, sea grass and coral reefs and get to understand how human activities affect these marine ecosystems.

Aside from learning more about the three ecosystems, participants actively contribute to a cleaner and healthier local environment by cleaning up a mangrove area in a bay, which is congested with tons of rubbish washing in from the sea and coming from nearby villages and tourist destinations.

We started up running the adventure trips during the children’s summer vacation in 2014, but later the same year the Department of Education Provincial Division endorsed the Sea Adventure School as an official part of the science class curriculum among high school students in the District of Puerto Galera, where there are five major high school campuses. Each of them has a student population ranging from 300 to over 1,500 students. The formal collaboration with the local high schools has rooted SAS into the local community, and the children’s experiences of SAS are integrated within their larger educational context.

Today SAS trips are reaching more than 2000 participants each year. In 2018 Stairway began offering the Sea Adventure school to members and partners of the local government, after the head of Puerto Galera’s Municipal Environment and Natural Resource Office (MENRO) saw the activity as a relevant and creative tool to educate her colleagues in the municipal hall about marine environmental issues and policies. This close collaboration has enabled Stairway to to have a seat and voice as a non-government organization (NGO) representative in three multi-stakeholder committees that tackle Puerto Galera’s environmental concerns.