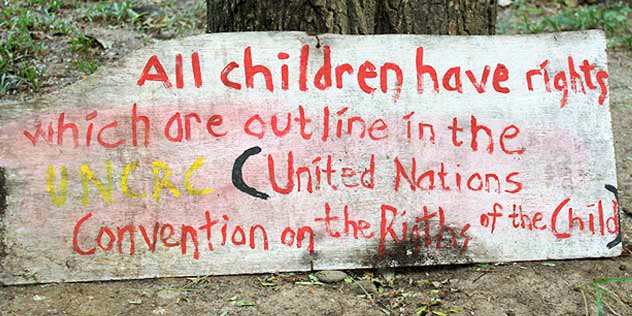 United Nations Convention on the Right of the Child (CRC)
A legal instrument for the promotion and protection of children’s rights, CRC is an international binding instrument that received the most number of ratifications amongst all other international human rights instruments.

Government signatories to this convention are committed to ensure that children’s rights are nationalized and implemented at local and national levels.

United Nations Universal Declaration on Human Rights (UDHR)
A declaration that set into motion important international human rights instruments such as the CRC. It states in the most concise manner all inherent and inalienable rights that human beings, including children, should enjoy.

United Nations Convention on the Elimination of All Forms of Discrimination Against Women (CEDAW)
CEDAW, also called the international bill of rights for women, calls for the abolition of laws, regulations, customs and practices that are discriminatory to women, including girl-children.

Protocol to Prevent, Suppress and Punish Trafficking in Persons, especially Women and Children (2003)
Also known as the Palermo Protocol, it is a supplementary instrument to the UN Convention on Transnational Organized Crime. It defines trafficking in persons as the recruitment, transportation, transfer, harboring or receipt of persons by means of threat or use of fraud, coercion, force (abduction), and abuse of power for the purpose of exploitation.