“Beep! Beep! Beep!” The alarm squeals in my ear. I roll over and see it is 4:30 AM. On any other day, I would just ignore the sound and instantly fall back into the night’s imaginings, but today is different. I am full of energy and anticipation, because it is the first day that the Baclayan children will take part in the practices of the local soccer program named Puerto Galera Football Club. It is time to begin my pre-dawn trek up to Baclayan. I flag down a tricycle and am soon engrossed in meditations of the days’ events to the backdrop of the motor’s hum. Upon arriving at Santo Nino trailhead, I embark upon the hour trek towards the center of Baclayan. I began my ascent as the first golden beams illuminate the path that lies ahead.

After a few minutes of walking through Barangay Santo Nino, I pass by the modest nipa huts that grant my entry into Baclayan, the Mangyan indigenous village in which I work and live. I am met by smiling faces and greetings of “magandang umaga”, good morning in Tagalog. I continue my climb up along the dirt path through the jungle. Green paints the landscape and the humming of crickets fills my ears. Even at this early hour, I breathe in the sticky air and sweat drips down my chin. The forest breaks signifying the arrival to my final destination. I turn back to see glassy blue of the sea far below and wisping clouds filling the sky above. Paradise!

After one final bend, I am met by one of the mothers in front of her sari-sari store, with her son in hand. It is time for football and meeting other children below! As the boy and I descend, three of his friends join. Echoes of laughter and shouting follow the rag tag brigade as we make our way down the mountain; I am sure it is to the dismay of those people still sound asleep! By the time we leave Baclayan, more boys and girls fall into the ranks, and our numbers swell to nearly twenty. 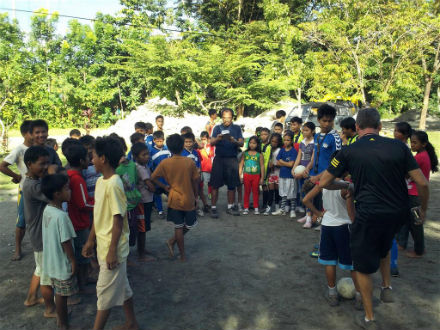 We follow the road for a few minutes more and arrive at the football field. The laughter quickly subsides and is replaced with looks of awe and fascination. The children of Baclayan watched the skilled play of the others. The novel game leaves the mountain kids timid and wide eyed. I walk out to meet Coach Barry and play suddenly stops. The hesitant children from above follow my lead and are met with discerning looks. Upon introductions I feel tension filling the air, because I know most of the local children have had little interaction with their indigenous brethren. All of the participants are soon divided into different groups, and practice is set to begin. The Baclayan children take the field shoeless, wearing tattered shirts and full of apprehension, but no matter now; time to soccer!

Before the first drill, Coach Luloy reminds the other children to take care with their cleats as to not step on one of the bare feet. Upon hearing this one of Stairway’s oldest boys decides to take off his shoes and shin guards playing shoeless alongside his newly found comrades. In an emotionally stirring scene, the other children follow suit choosing to play barefoot on the field of cinders and rocks, for the benefit of their companions of Baclayan. This act is enough to bring a tear to the eyes of the adults who witness the scene. Although the Stairway children faced struggles on the streets of Manila, a far cry from environment of the foothills of Baclayan, there seems to be an instantaneous and empathetic bond, because both have come from disadvantaged backgrounds. This subconscious connection is contagious and soon spreads to the rest of the children. Drills continue on, and the seasoned players tutor their Baclayan counterparts in the rules of the game. By the beginning of the scrimmage, the Baclayan children, have acquired enough knowledge of the game to participate. What the new players lacked in skill, they more than made up for with athletic prowess. The countless trips the children had made up the hill during their lifetimes serves them well. Impressive speed, endurance and toughness allow them to compete step for step with the others. 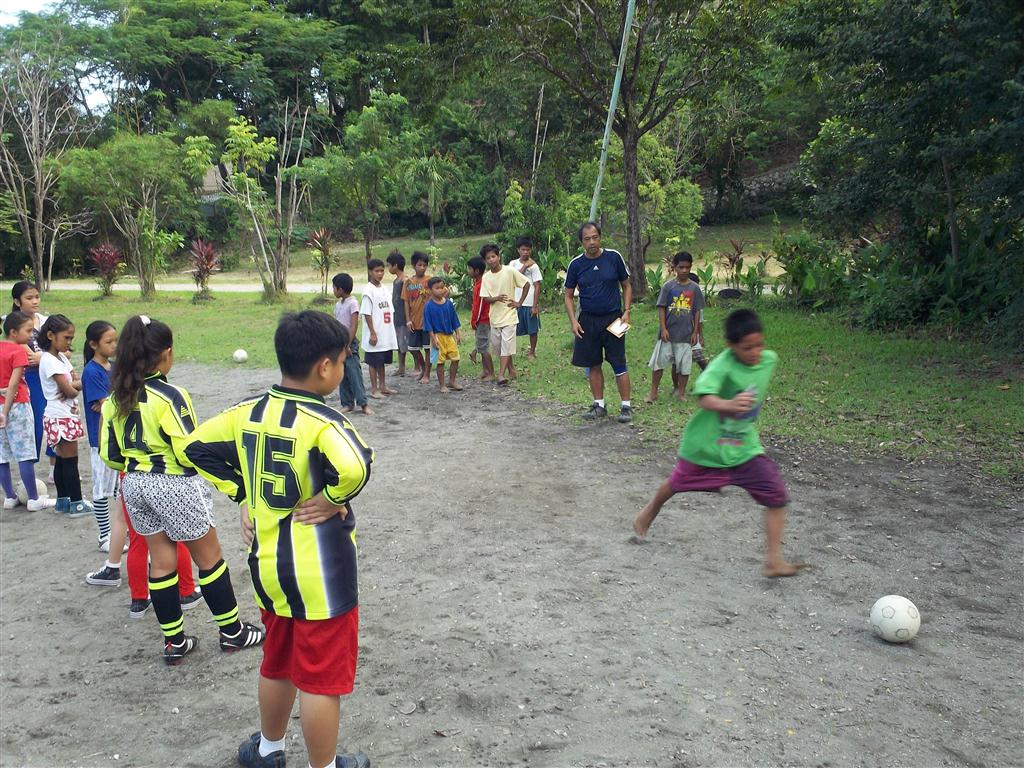 The play continues, and the significance of the scene interrupts my coaching, as I take a moment to stop and reflect. The children of different paths and social status are playing together full of smiles and laughter. Sport is working its magic, breaking down discriminatory boundaries, facilitating cooperation and teamwork. It fills my heart with joy to observe the transformation before my very eyes.

The games carry on, and a ball is passed ahead to one of the Baclayan children. He shoots and scores! No longer bound by reality, the boy flies back down the field, full of jubilation. His new teammates cheer him on, celebrating with smiles and high fives.

That single moment is the reason for our work. Just imagine…